This afternoon I was waiting for the bus, on my way to meet my husband for pizza and a beer. As I stood there with a bag of Halloween candy over my shoulder and a sock on the needles, I saw some kids "tag" a bus shelter. I can appreciate true graffiti art on building walls, done with permission, but the tagging of public and private property makes me so mad. It's my tax dollars that pay to clean buses and bus shelters, and homeowners should not have to spend money and time to paint over crap done by kids who can't find something creative to do with their time. We've had a rash of graffiti in the neighborhood the past couple weeks.

In fact, as one kid walked up he boasted that he had made one of the marks already on the shelter. I watched one, and then another draw on the bus shelter and the sidewalk. I kept knitting as I tried to memorize what they looked like. Then I called the police, and to my surprise they answered on the first ring. To my further surprise an officer called me right back and a patrol car drove up.

I hid around the corner as the police questioned the kids. I see them hanging out quite often, and don't particularly want them to know I busted them. It's a busy corner so quite a few people were watching. I just kept my head down knitting, wishing I wasn't wearing bright colored Halloween clothes. I talked to the officers and it was decided I would identify the kids from the back of a patrol car.

Yuck-o! Since the last time I was in a police car things have changed. The back seats are molded plastic, so there was a pile of crumbs and I-don't-want-to-know-what funneled into the bottom of the seat. The debris doesn't sink down out of sight like in upholstered seats. And it is small back there. So I kept knitting. And took a photo of my sock. 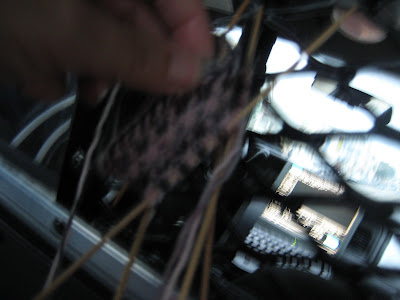 I identified them. Afterwards I was transfered to a plain-clothes car, which had a bottle of hand sanitizer mounted in the back seat. They dropped me off at the pizza place. The pizza was a little cold, but it was worth it possibly scaring some sense into these kids, who apparently have been arrested before. I wonder what their parents think they are doing? Throwing a football around in the park? There's a youth center a block from were they were tagging. Maybe some of the people who were gawking will realize that there are people watching them who care about the neighborhood. Knitters are watching.

Ironically, I was already planning on taking K. trick-or-treating at the police station. When we got home I was having second thoughts. What if I ran into the officers? I didn't want to look like some neighborhood police-obsessed wacko. But after looking up and down our street and seeing no houses with decorations or porch lights on I decided the police station might be the only place my engineer could do his first trick-or-treating.

It turned out to be fun, they had the station decorated inside and out. A lot of other kids stopped in and an officer was giving out candy, stickers, balloons and such. No, I did not get photos of the little engineer.

As we walked back to the truck my past collided with the present. The bar I used to hang out at is half a block from the police station. When I parked my truck across the street I thought it was early enough that my ex-husband wouldn't be there, but no, he was right on the corner with his buddies. So I did what any mother would do, I'm sure, took my son trick-or-treating at a bar. No, we didn't actually go in, they brought the candy out to us. It was kind of fun, we had a nice chat.

We drove home and parked a block away and trick-or-treated at a few houses up there. K. didn't quite get it, he kept storming into the homes. All-in-all he decided he likes Halloween, the pumpkins and the "cocoa".
Posted by Janice at 7:43 PM