I'm a dumbass. Count the ways. 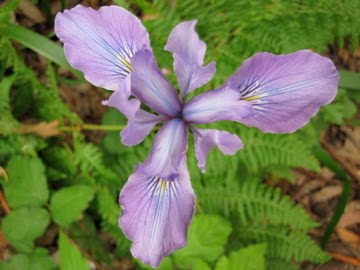 I started hiking at San Pedro Valley Country Park. There's just enough time to drop my kid off at school, zoom down to Pacifica, do a rigorous hike, and make it back to school at noon. I had hiked here in the past, toward Montara Mountain, but lately I've being taking the innocuous-sounding "hazelnut trail".

I have seen a lizard, a snake, bunny rabbits, quail, deer, hummingbirds, and tons of wildflowers. 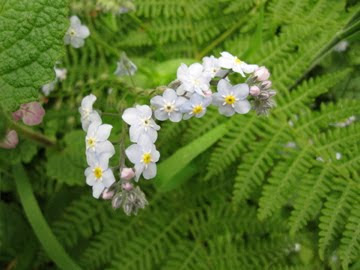 Right now the trail is very overgrown in places. No-one else is on the trail. Very peaceful, and every visit is different, even though it is the same time of day and week. Last week I found this on the trail: 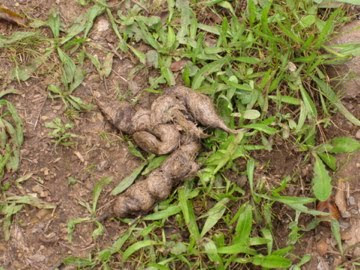 I knew it was a from a predator because it was full of hair. When I got home I showed the photo to the former hunter and verified with pics and info on the internet that it is from a mountain lion. I know the rules for dealing with them:
Let's review my actions the day I took pictures of twenty different flowers. I've got #4 covered without trying, and #1 also as I stomp uphill in my giant hiking shoes. And as long as I was heading uphill, #2 wasn't going to happen. But think about #3 and I am pure dumbass, stopping, leaning down and taking photos of flowers (and scat). Pretty quiet, too, composing and focusing and fiddling with settings, and all.

So after some discussion a compromise was reached. I would carry pepper spray if I insisted on hiking there alone. I thought a bear bell would be a good idea, too.

I headed back up this morning, even though I wanted to see the start of a stage of the Tour de California. Exercise and meditation won over celebrity watching. But if Thor Husvold had not broken his collar bone last week and was a mere mile from my house, the decision would have been different.

I got to the trail and discovered that in my efforts to secure the pepper spray at home I had forgotten it. I took the camera but vowed not to take pictures up on the hill. Since the sporting goods store did not have a bear bell, I improvised by jangling my keys all the way. I should also mention the guy at the store asked if I wanted to buy a Tazer for the lion. Uh no. Dumbasses probably should not have those.

I set my watch because there is no room for dawdling if I want to get back to school on time. Like a dumbass I got soaking wet on the overgrown trail. I mean water was squishing out of my shoes. I also found I could not really enjoy the hike because I was pretty scared about the mountain lion. I know they don't normally attack people, but it happens from time to time, and I knew for sure I was in their territory.

I saw a lot of small cat prints, but I'm not so scared of bobcats, they are little. But the trail got really overgrown and it was pea soup foggy, so I couldn't see much near or far. I got really spooked. My hair caught on a blackberry branch and out of my peripheral vision I mistook the still-shaking branch for a critter. I got scared by a rabbit. Thank goodness a deer didn't dart out, one look at that light-colored fur and I would have fainted. My pants were so wet that they were hanging up on things. A sensation that one could imagine is similar to a mountain lion reaching out of the brush and swiping your leg. I let my keys bang against my metal water bottle. 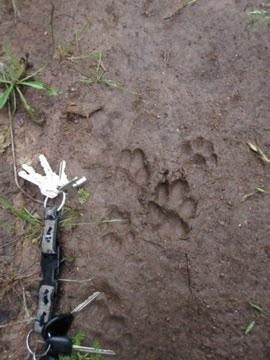 Then I saw big prints. I'm pretty sure these are mountain lion on top of bobcat. I risked my life to take this picture for you. What's that? Do I hear echoes of "dumbass"? There were just tons of prints on the trail. I was so relived to get off the hill and onto the last mile and a half of graded trail. I was rewarded with four different bunches of quail, two cottontails, and a deer.

I had just enough time to stop for a cup of coffee and get to the school on time. I drove into the mini-mall by Highway 1, ran in for my coffee, but left because there were a couple people ahead of me and no-one taking orders. I pulled across the road to find a police officer turning everyone away because the highway was closed for the bike race. Dumbass! I knew about the race, I even saw warning signs driving down the but they said the southbound side would be closed. Only a dumbass would believe that. The officer thought the odds of my finding the back way north would be about as good as waiting 20 minutes for the race to go by.

I made frantic phone calls to see if anyone could get to the school. Then I made the dreaded call to the school to say I would be late, fortunately my friend answered. I decided if you can't beat 'em, join 'em so I went and saw the race after all. Here is my photo of the leaders: 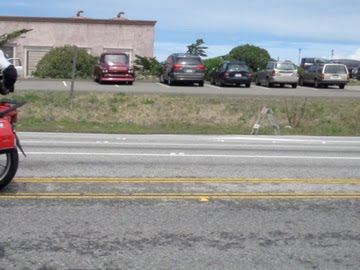 In the end I only got to school fifteen minutes late. They really did open the road up quickly. I got to school, dug in my bag for money in case I had to pay a fine for being late and found my pepper spray. I mean really, how can one person do so many dumb things in a day? And it isn't even over yet.
Posted by Janice at 2:09 PM No comments: