I did get 4 oz. of the rose spun this month for my sweater. I'm also working on my contest socks.

I decided I needed a break to make something just for the fun of it. This merino was hanging on the wall at Urban Fana Studios right next to the paillettes. Immediately I thought of the older ladies who "ran" the church kitchen and basement when I was growing up. My step-father called them the blue-haired mafia. Sometimes their dye jobs were quite blue, and at least one had a crocheted hat with paillettes. I got home and found I had some metallic fibers in the stash. 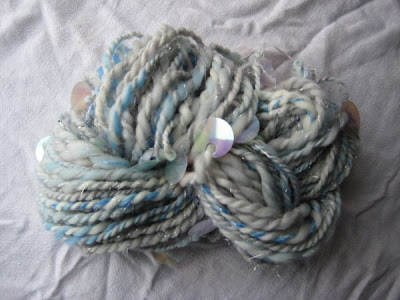 I think you are supposed to blend the fibers into a batt, but I wanted to see if I could just integrate them as I drafted, and it worked. The bigger challenge was how to wind the cop after I plied the yarn with the paillettes. I hadn't strung enough on, so they are only in the first third or so of the yarn.

I like the skein, but am going to strive to make the rest more think and thin. I'm also going to knit a swatch to see how the spacing is. I'm picturing a hand bag with paillettes at the top, and the same yarn, but paillette-less below. I'm not sure I could rock a hat, but we'll see.
Posted by Janice at 8:06 PM