This Saturday all the San Francisco firehouses were open from 1 -5 as part of Fire Prevention Awareness week. K. loves fire trucks and engines and actually gets to see them quite often, as it seems several stations use the same grocery store as we do. They also park at the beach to test the equipment.

So instead of a local station I decided we should catch the streetcar out to the station that houses Phoenix, the fireboat which is credited with helping save the Marina from fire after the 1989 earthquake. If we timed it right we could see the Fleet Week air show, too.

How do I know so much about the Phoenix? Because we have the book. She is docked at engine station 35. 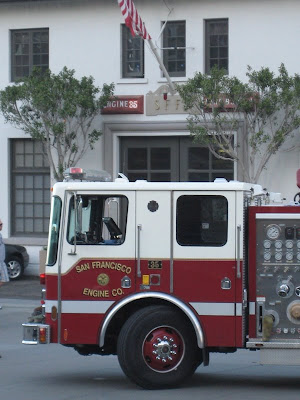 Naptime went late so we actually watched the air show sporadically from the corner, and then the streetcar. But it also meant that Mr. TVP got home from work in time to come along. We arrived at the station and there was an engine outside, but the Phoenix was not around, and the station doors were closed. Things didn't look good. I hadn't built the kid up too much, and he understood "maybe" we would see this and that, but it was a long ride for just a fire engine.

We asked the firefighter who was talking to the public where the Phoenix was and she said they hoped it would be back soon. Just then the fireboat came into view. I didn't want to ask about the firehouse tour, but when the she saw how excited K. was, she led us through the station to the dock in the back. 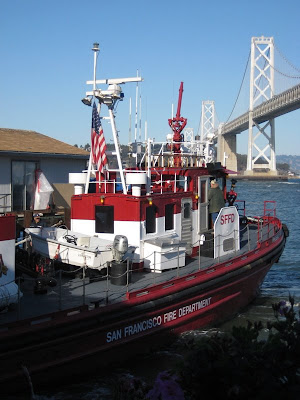 We got to watch the passengers unload. Normally you can only see the top of the Phoenix from the Embarcadero, so this was pretty cool. Some more kids showed up, and everyone went back out front. K. was warmed up to the whole thing now and inspected the fire engine. He got to climb inside, but that was cut short when the Phoenix had to go off to an alarm. 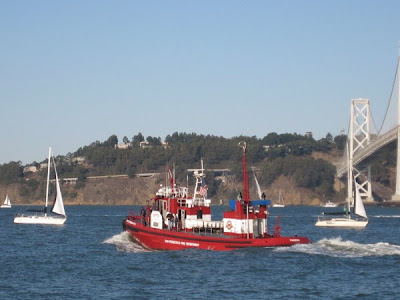 Meanwhile a police motorcade went by. Then the Phoenix came back and we got back on the streetcar. A nice afternoon for a little boy: streetcars, planes, tunnels, fire engines, fire boats, police motorcycles, the Bay Bridge, Daddy, Mommy.
Posted by Janice at 6:12 PM