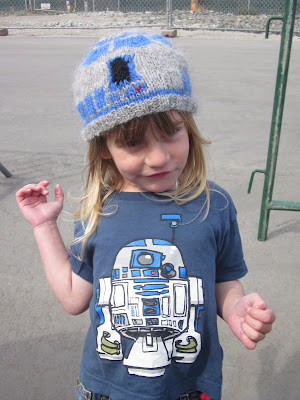 We went down to the Faire this morning, a flawless trip. I bought the tickets in advance to save $15, we parked in a free lot, ran to the shuttle and arrived ten minutes before the gates opened.

On the way down I was weaving in ends of the R2D2 hat I cast on last night and finished at 1:20 this morning. Confidence was high that I would finish it in time, even when I frogged the whole thing at 10:30 pm because it was too large. The hat was worn for less than half an hour total.

We went to the kid area first, which conveniently for me, was near the crafting. So nice to be there early and have room to look around. Next stop ice cream. As much as I love chocolate ice cream it was not that appetizing at 10:40 am. Even R2D2 couldn't eat more than a few bites. We moved on and I spotted Mike Rowe from Dirty Jobs. I was within six feet of him. Very exciting. This poor photo shows him being interviewed by (I think) Zachary Coffin the inventor of Colossus there in the background. There was no opportunity to actually meet Mike Rowe or get an autograph. He had quite a large group of officials and security around him. And I probably had chocolate ice cream on my face. 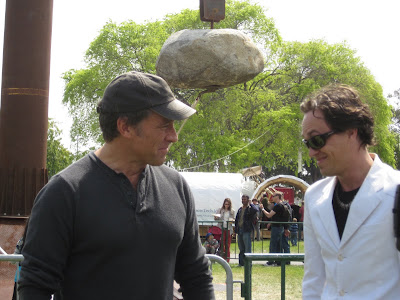 During the day I ran into friends from my knitting group, folks from the shop, crafty vendors, and my ex-husband.

We wandered around. I took a quick soldering class and made a little robot pin with a light. I resisted buying yarn, but did get some carbonized bamboo to spin, a pattern, and these pink wool hair elastics from NifNaks. 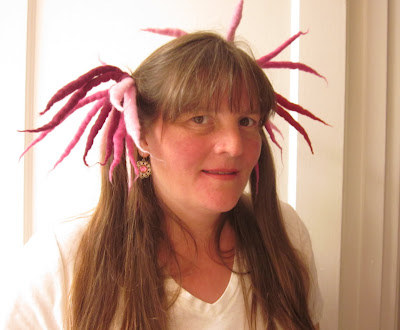 Many favorites were there, like the cupcake cars and Katherine Jolda's bicycle-powered drum carder. 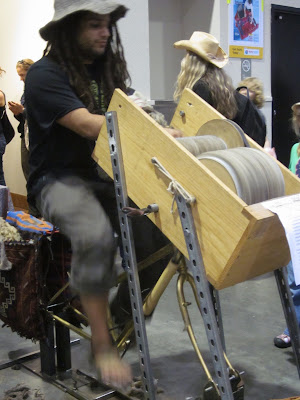 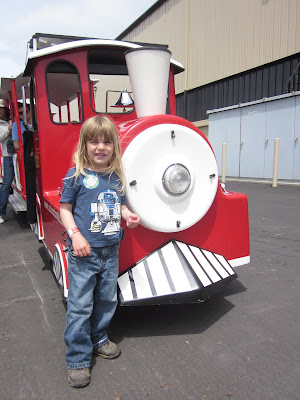 There is something for everyone at the Maker Faire. 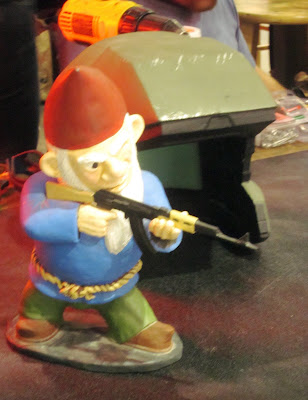 We left having seen a lot but not everything. It got too crowded and we were tired. As we got back to the parking lot at 2:30 we heard someone in the long line for the shuttle to the Faire wondering why we were leaving so early. We laughed and wondered why people would get there so late. Arriving before the crowds is the way to go when you have a little kid.
Posted by Janice at 4:17 PM 1 comment: