I went to our neighborhood "greening" event today. Timberland sponsored the tree-planting and park cleaning in exchange for a promise of 400 volunteers. I signed up to work on Sunset Blvd., which is the widest, greenest street in this part of the city. I have walked, biked and jogged literally hundreds of miles on it in my lifetime.

At first I assumed I would be cleaning it up, then I read in the paper that trees were going to be planted along the boulevard, although it didn't say when.

I got to the meeting place at 8:20 and got in line. It was quite confusing. Turns out one entity was coordinating tree-planting, and another the park cleaning, but it wasn't clear where to go. 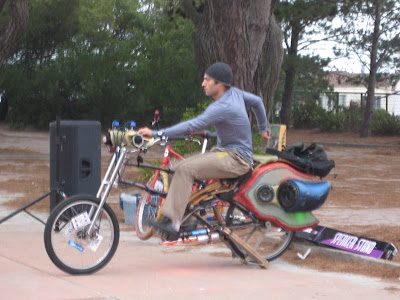 Little by little my group formed, I noticed it was all teenagers. In fact, many of the volunteers were teenagers which I think is really cool. I know many of them have to perform public service in order to be in clubs and honor societies, but they all seemed pretty cheerful. I was a little less cheerful when I found out we weren't planting trees, just cleaning up. But one of the group leaders said I looked familiar to her, and I felt the same, I was looking forward to talking more to her, so there was that.

Finally we picked up our tools and garbage bags and got on a nice biodiesel tour bus at about 9:15. I was kicking myself hard for not bringing any knitting, I could have done quite a bit with all the waiting around. The group leader announced that she needed five people to volunteer to go to a different site with her. I hoped I could go, but five kids wanted to stick together so I didn't. We roamed around the neighborhood on the bus dropping groups off and finally got to our spot. I was a little glum. The other leader asked me to take half the kids in the group since I was the only other adult. Herding teenagers, the day was not exactly looking up. At least it was foggy, the sun wasn't beating down.

Of course the boys went with the guy, and the girls with me. We split up at about 10:00, off to pick up trash, and clear the edges of the path where grass and weeds have grown over it. Turns out the kids were from my high school, Lowell. They were actually good kids and fairly enthusiastic. Being a leader is not my forte, but we did fine, and the girls worked hard. Well, a couple didn't exactly know what to do, but they were receptive enough when I gave them direction.

The first block was really hard, but worthwhile. The path is paved for mixed use, but in some places several inches have been lost and it makes it a bit tricky when you are on a bike and want to pass pedestrians. This has always been a peeve of mine on this path. A lot of the people walking are elderly and I want to give them a wide berth, not startle them with my bell, and swooop right next to them. Yet, I am not going to ride on the overgrown edge for fear of running over hidden glass or other debris that could flatten a tire. This block was one of the worst, luckily we had a couple of sharp shovels and were able to cut it back and make it more usable.

We did the next block quickly, and everyone, including me, was flagging a bit when we crossed to the other, unpaved side of the street. We just picked up trash which was much easier than edging. I spent most of my time trying to get one person with a trash bag to walk at the front of the group, and the other at the back. If you are going to hold a trash bag, at least carry near the people pinking up the trash! We met up with the guys at 11:45 and waited for the bus to take us back to lunch.

We got back and dumped the tools at about 12:15. Lunch was supposed to be at 12:30 so I killed time in the library which was conveniently right there. Checked out four knitting books including a major score - a pattern that I can tweak into a gnome hat for a Ravelry swap I just signed up for. I got in line for lunch at 12:30 and tried to determine if there was anything but meat on the grill, then it was announced that lunch wouldn't be for another 10-15 minutes. I was hungry, not particularly interested in the food, and fifty people were ahead of me in line, so I left.

Problem was I couldn't go home because K. was napping, and would be for two hours. I was kind of dirty and in Carharts and work boots, so I couldn't go anywhere too nice. Worst of all, I was wasting precious knitting time! I went to a local pizza place that has a bar and had a beer and lunch and read the knitting books, and worked on converting the gnome pattern. I got home and could not hear any noise inside so I sat on the door step and read the mail. Thank heavens the kid woke up right before I was forced to read the only thing left, this month's Fur Fish Game.

The day didn't turn out quite as I had expected, but we made a tiny bit of difference, and I got a hat and a t-shirt. It was nice to sit at the bar and chat with people, and enjoy a meal.
Posted by Janice at 8:50 PM

Hooray for community service! Where would we be if nobody decided to help out?