I heard the best country song on the radio yesterday: "Pray for You" by Jaron and the Long Road Home. Here are a few of the lyrics:

So I listened to the preacher
As he told me what to do
...I pray your brakes go out
Running down a hill
I pray and flower pot falls
From a window sill
And knocks you in the head like I’d like to
I pray your birthday comes and nobody calls
I pray you're flying high when your engine stalls
I pray all your dreams never come true
Just know wherever you are
Honey, I pray for you


***
I know it is shallow, but I really hope that the rumor that Sprint will support iphones by this Fall is true. I really want one, but don't want to change providers. I wouldn't say I'm praying for it, but wishing really hard.

***
Speaking of prayer, have a look at this car: 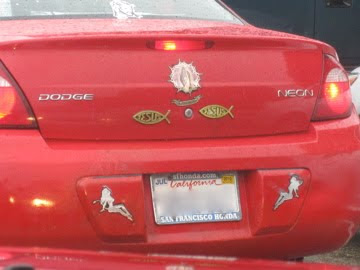 At top we have a sticker of Jesus, then praying hands, two Jesus fish, and finally and angel Lucky Lady and a devil Lucky Lady. What is the message here? I don't know, but I'm pretty sure Jesus doesn't approve of objectifying women.
Posted by Janice at 6:15 PM No comments:

Why I had Ice Cream for Lunch

or Why there's a hot dog in my backpack

First off, I have been knitting away here, but the weather has been rainy for weeks, so no pics. Also I have a few half-finished things. To catch up with the past couple of months - I knit myself a pair of socks for Christmas (Jaywalkers in Dashing Dachs "Jingle Bells"): 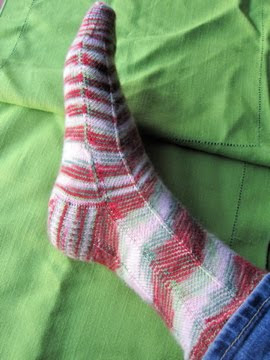 And a pair for Mr. TVP (Basic 5-stitch-to-the-inch from And Budd, with full ribbed leg in Ístex Hosuband): 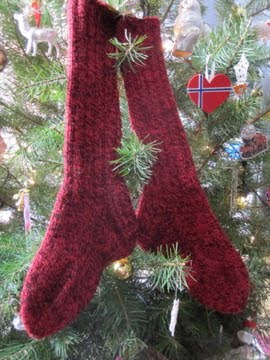 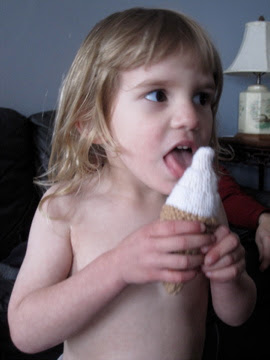 And a scarf for myself (Miski baby llama and improvised using Sweetheart Glovelets pattern) FYI, you can't always just turn a lace pattern upside down.: 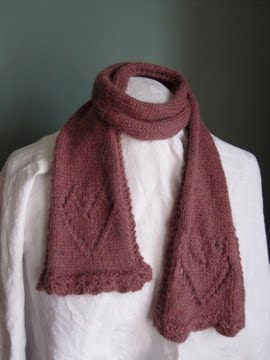 I also knit a hat and some booties that look just like some others I had already done, no photos needed.

***
On the bike front, I have been riding a lot, even in the rain and muck. I do hope I will get into the Cinderella ride. Got filthy mountain biking in the rain this morning.

***
So back to the title of this post. My kid no longer naps. Which makes the afternoons long, but the evenings pleasant, since he goes to sleep after 7:00 instead of at 9:00. He also has started calling me stupid. Some things I let go, but that isn't one of them. I don't care for it, and I don't need him to start calling kids at school "stupid". Haven't hit on a good punishment or deterrent yet.

The new developments along with constant rain and stomach bugs has made the past couple weeks challenging. I tried to lighten things up today with a celebration. Not napping is a milestone, and he is doing well going to bed early, not fighting it too much. We will be able to do things like swimming lessons in the afternoon again. The plan was to pick him up from school, go to the mall, have lunch at Chevy's and go to Borders and buy a toy, DVD, or book, his choice.

Things went wrong right away. He didn't want to go to Chevy's even though he likes burritos and I promised they do have chocolate desserts. Plan B was eat at the mall food court. Sketchy because he only likes certain foods and we had already had pizza this week. He has never had a hot dog, but keeps reading about them so Hot Dog on a Stick seemed like a safe choice, and the Japanese place was right next door so we could sit in between, and he wouldn't have to wait for while my food was being made.

I explained about the corn dog and that he could peel the bread off. No way. Then like a rainbow I saw the plain hot dog on the menu. He was thrilled. We turn around and all the tables near us have filled. So we needed to wait and get my food before sitting down. No way, before I could even order he freaked out and pulled his pants down right there in the mall food court. I grabbed the hot dog and we headed to the only available table which was nowhere near the food counters. So no lunch for me.

I know some people would have let him sit there and cry, but I don't like to make a scene, and it takes a long time for the sushi to be made (relative to grabbing pizza or a hot dog). I was really hungry because I had gone bike riding, but the meltdown made it obvious who was hungrier.

I consoled myself with the idea that I could have some frozen yogurt with him since I was skipping lunch. Well, little mister was so excited that he ate half the hot dog and wanted to go right to the bookstore without dessert. Compost the hot dog? Oh no, save it for later please, so into my backpack it went.

On the way to the bookstore I spotted a man I used to be involved with. For whatever reason I get really flustered when I see him. Maybe it's because he can be described as having a certain charisma while I can be described as a goof ball. Picturing a half-eaten hot dog in my backpack didn't help matters. I chickened out and didn't make eye contact. Did he see me? I don't know. At least I was wearing lip stick and my kid wasn't acting up at the moment. And the zipper on my backpack didn't break, scattering kid debris and aforementioned hot dog onto the escalator.

The bookstore trip went fine since I was hopped up on adrenaline from my brush with my wilder past. We head back to get the darn frozen yogurt before I crash from lack of food. Then I realize that I don't know if the kid likes frozen yogurt. Better go with a chocolate ice cream cone, something he and his dad have all the time. That way I can have my own fro-yo, thank you very much.

Except he can't eat an ice cream cone unaided. So we trade. Except he doesn't like frozen yogurt. So I ended up eating 2/3 of the ice cream until he could handle it. And I eat my fro-yo, too, glad I got the small. Ten napkins and three baby wipes later I got out of there with dignity and sanity barely intact.

Where do you go after ice cream and frozen yogurt for lunch? To knitting group at a dessert cafe, of course! Actually I haven't had a dessert there in ages. I usually get two drinks, depending on how long I'm there.

So much for celebrations at the mall. Oh, and he called me stupid when we got home.
Posted by Janice at 3:19 PM No comments:

I have decided not to buy any yarn this year, I will knit completely from stash. I have heard rumors that this can be done. We shall see. Truth is I have way too much yarn, lovely yarn that I want to make into lovely objects to enjoy.

It will not be a sacrifice. Here, off the top of my head, are some of the things I could make with what I have:
How did I get to this point? I like yarn. I also like to shop. And to get bargains. And to plan. I do like to knit, I swear. The problem is I keep learning about new techniques and different kinds of yarn. I get excited, buy the stuff, but don't finish a project before I get distracted by the next wooly thing. I also need to find a way to sit down and knit in the evenings, with a simple pattern since it's hard to concentrate with a wild kid running around.

I'm not being hard on myself. I have learned a lot in the past few years, and have made a lot of things, which reminds me I have quite a few items to post from the past month. Yeah, and those summer knitting goals to review. And I like a good challenge.

I have a WEBS gift card that doesn't count if I decide to spend it. That may come in handy at Stitches next month. And swapping yarn is okay, too. And knitting needles and tools are okay in moderation. But buying yarn at shops, fairs, or from eBay is out.

I have plenty of spinning fiber, and just got some for Christmas. I'm not going to take a no fiber pledge, but will be very conscious about what I buy.

We shall see how I do. It will feel good to use up my yarn, make a little space, and save money.
Posted by Janice at 7:43 AM 4 comments: