I'm off to Stitches West for the preview tonight. Lots to tell about my birthday, it just keeps going.

I walked into K.'s bedroom the other morning and found that one of his trains, a crane, and a mug of water I left in there had been turned into a rescue mission diorama. 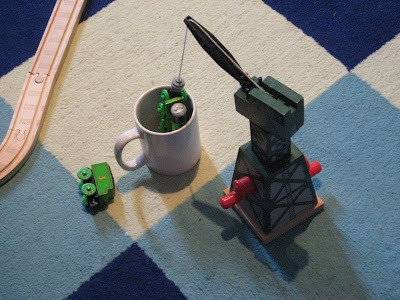 I don't know why I like this photo so much, even though I know a little boy set them up, it's almost like the toys have a secret life of their own. I was a moment frozen in time.

Also makes you wonder wait little boys are thinking when they think no-one is watching. 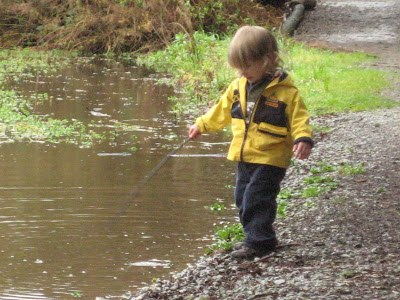 I will be turning 40 this Thursday, just wanted to get that out there. I always love my birthday, and I'm not bummed out about the changing of the decade, but it does give me pause when I stop to think that I've been on this planet forty years.

Sometimes it is hard to believe. I mean the grey hairs are getting out of control and my 2-year-old wears me out, but I thought I would feel a lot wiser at 40 than I do. Maybe there will be some huge change in the next four days and the wisdom fairy will visit me. I'll be sure to let you all know if that happens.
Posted by Janice at 3:41 PM 3 comments: 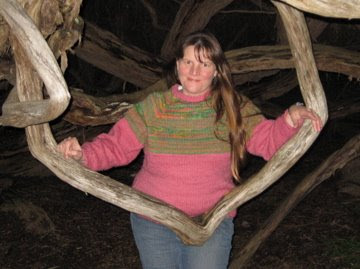 Hope everyone had as pleasant a day as I did. We went out early as a family for coffee at the ocean. There was hail standing on the ground, which is pretty unusual, it generally melts right away. There was even ice right on the sand at the beach. I only had my cell phone camera, what a bummer! Then we took a little trip for me to visit the job site I had yet to see. A rainbow was poking out of the clouds down the coast and back.

There were roses for me, a book and chocolate for K. Then a visit from Grandpa and naptime. This afternoon Mr. TVP and I went out on our own chocolate shopping and for a gourmet snack and drink.

On the way home we stopped in the park for a photo shoot. If we are "friends" on Ravelry then you've already seen my sweater there or maybe in person. But I did alter the sleeves and the overall length this past week. 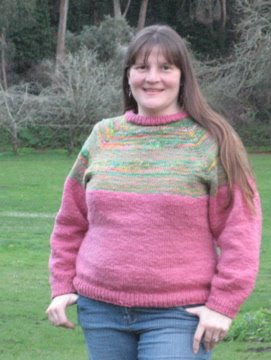 I'm really happy with it. Makes me want to knit more sweaters! 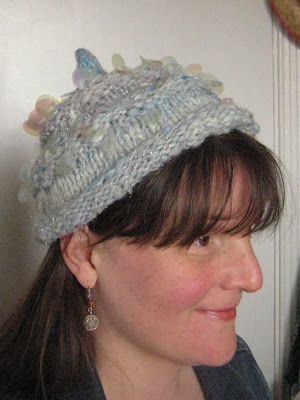 I blogged about the yarn I spun, 'Blue-Haired Mafia", here. I made up the pattern as I went along. I soon found it was easier to leave the paillettes on the back of the work, rather then pull them through (they are spun into the yarn). I'm sure there's a name for this, but instead of purling, I knit a section stockinette in the round, then did a wrap and turn and knit the next section, wrapped and turned. I like the roundness of the purl stitches with the pailletes. Only part of the yarn had paillettes, so I used them as an accent on the purl sections. They didn't look good right next to my face, so I frogged and left them off the first section on the second attempt.

It looks really good on the little guy. 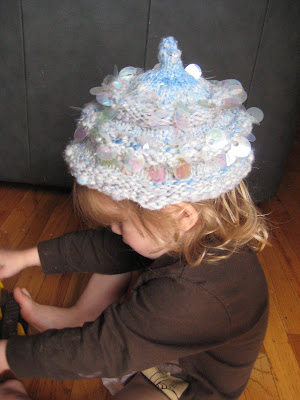 I have a bunch of the yarn without paillettes left. Not enough for mittens, but almost. I guess I'll spin some white yarn or use something from the stash and make them striped.
Posted by Janice at 6:45 PM 1 comment:

My gnome hat partner is really, really into gnomes. She has a garden full. I wanted to make her a very special hat, but not too crazy. I found out she likes purple, and with that in mind I started to look for fiber.

At first I was going to wet-felt a hat, but my practice attempt proved I am not good enough at that yet. So I looked for spinning fiber, and found just the thing. The braid is from Traveling Rhinos. I pulled some dark purple from my stash. 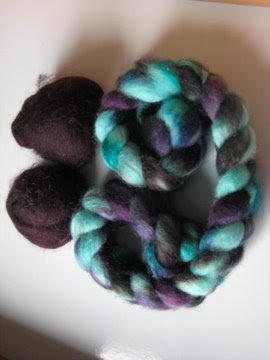 The pattern is called "Gnomey Child's Hat" by Adrian Bizilia of Hello Yarn. I really liked the two-tone effect, so I decided to split the fiber up into a mostly purple and mostly green. That was a bit challenging and also caused me to have to do a lot of joins in my spinning. I only used about 1/8th of the purple fiber in the photo, just enough to ensure that the purple yarn really came across as purple. In ended up with these 2-ply skeins. 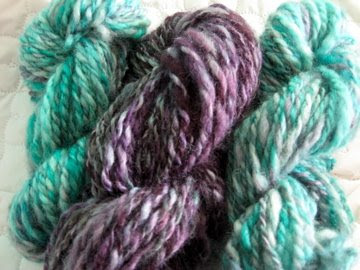 I got just the effect I wanted. To me the green is like moonlight reflecting, and the purple a midnight shadow. I can picture gnomes running around the garden in the moonlight. The yarn is really soft and there's just a bit of green in the purple and vice-versa. I altered the pattern by adding a bunch of stitches and rows. It is still pointy, but not outlandish. 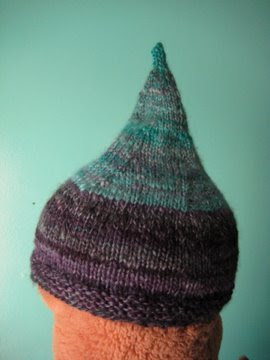 Look what I got in the mail today!!! 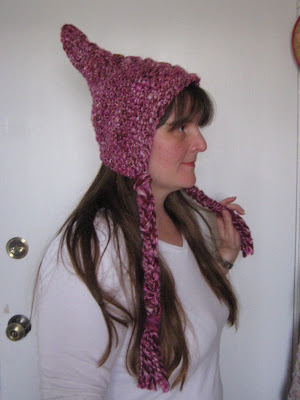 A totally awesome gnome hat from my Ravelry swap. It is a bamboo/silk/wool handspun, shiny and sparkly.

And look at all the other goodies. That bracelet has glass and felted beads, I love it. My partner makes wonderful stitch markers. 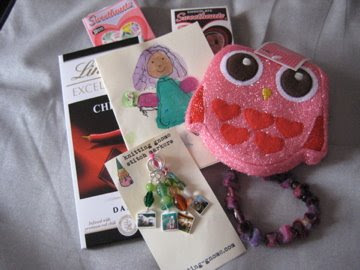 I cannot wait to wear this hat out. It was just too warm today. 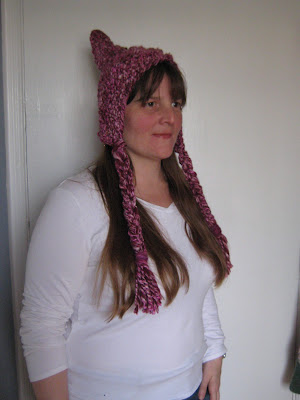 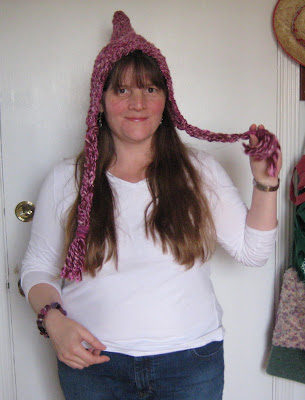