I dyed sock yarn yesterday. I needed two small skeins in increasingly dark shades of pink to go with the pink yarn I already have. I pulled Kramer dyeable sock yarn from my stash, tons left from the cabled sock yarn shortage incident, and I bought a container of Jacquard Acid Dye. (The acid comes from the vinegar you add to the dye bath).

I made three skeins and tied them loosely (I thought) which is key to avoiding white bands of undyed yarn. I thought if it worked really well I would use the big skein as my main color instead of what I have, as it is a bit thinner than all the others. I followed the directions and all went fairly well. However, it became apparent that the ties on the large skein were too tight, and try as I might to pull them looser, it was too late, the big skein was not all one color.

After half an hour all the dye was gone from the water, and the yarn wasn't dark enough, so I added more. I tried to be sneaky and dump it right near the undyed portion of the big skein so it could soak the dye up. It did, but now that portion is darker than the rest. 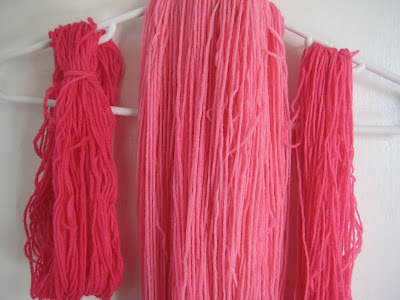 Next, I took the big skein out, leaving the other two to get darker. Again the water was clear, so I added more dye. After a while I took the skein on the right out, a few minutes later the one on the left. That one, the smallest and darkest, was most successful, pretty evenly colored. However, it is too bright a pink to be used in my project, I fear. All in all a fun experiment that didn't yield anything for my project. Not to worry, pink sock yarn will not go to waste with this knitter.

In "mom" news, we had another bad night last night so I struggled through the day. A woman at the recycling center apparently thought I was talking to myself, something not uncommon with some of the other patrons. K. was strapped into his car seat and I was thanking him for helping me unload, the woman came up next to me and said "Oh, I didn't see" and started laughing. I think she was saying she didn't see K. there and didn't know who I was talking to.

The Blue Angels cut Precious' nap short by half an hour, but we went with it, and headed outside to watch them practice. Nothing too gross to report, a giraffe did slightly slime by head when we fed her at the zoo. K.'s buddy was there. 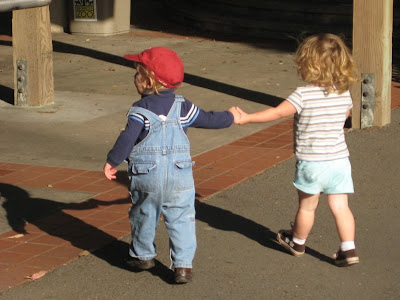 The little friends look so cute!