Let me tell you about some bloggers I met on Thursday via some photos I took.

It was a warm evening, and there was a golden glow as I walked out to catch the streetcar. Who says the Sunset is always foggy? Tom Prete wouldn't. He grew up out here, and it was nice to not have to explain what my other blog is about. I had a good chat with Jamie who blogs about his neighborhood, Rincon Hill.

Here's the train that took me downtown to the blogger party. Speaking of MUNI, at the party I talked to Greg of the N-Judah Chronicles. I also met Fog City Notes Rachel, and Fog City Mommy Rachel. I said "hi" to one of the Muni Ladies of Muni Manners. 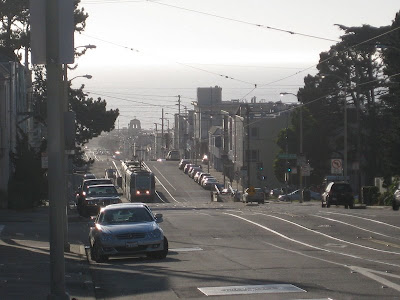 This is the Southern Pacific Building, where my father worked for many years. 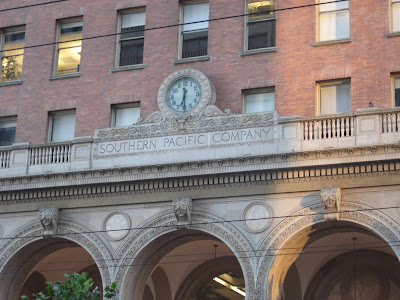 I ran through the Vaillancourt fountain many times as a child. 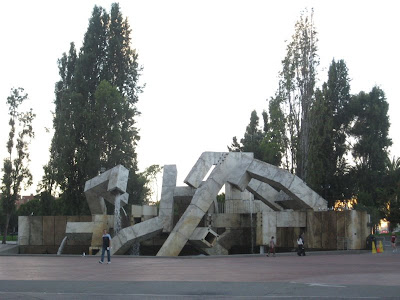 The Ferry Building. There were a bunch of bloggers from Oakland in attendance. I noticed a person on the "F" wearing a transit shirt. Turns out it was "Transbay" Eric. Marc, foodie of MentalMasala and The Ethicurean, is from the other side of the bay, Berkeley, to be exact. I also talked about Berkeley with the Rookie Moms. They have a book! 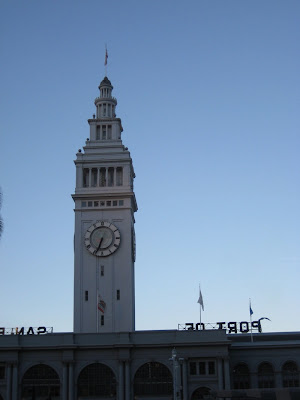 These clouds were really unusual. I wasn't the only one who thought so. A taxi driver stopped to take a picture, as did a couple other people walking up to the party. I met CBS 5's weather caster, Roberta Gonzales at the party. She is very charming, and was wearing killer shoes. I also met a camera man and a sportscaster. I can't remember their names, and when I look at the sports folks on Channel 5's page, I don't see the guy I met. He assures me it is true that Lance is really coming back to the Tour de France, though. 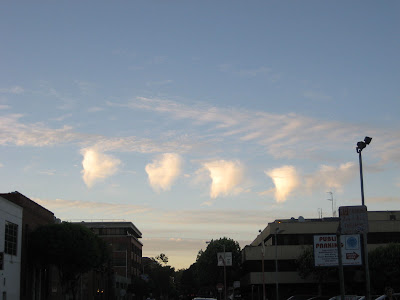 And last, but by no means least (I just didn't have photo to use as a lead-in) I met the very gracious hostess, Brittney Gilbert of Eye on Blogs.
Posted by Janice at 8:45 PM

Hey, thanks for the mention, Janice! And (shhh) don't tell anyone, but I can grow tomatoes just eight blocks from the beach.

Could I have come if I still lived in Martinez? The weather has gotten cool enough for me not to want to spend all my time outside so I'm trying to catch and be a good little commentor.