We got back at 12:45 this afternoon and I had to clean up and run out for the Daughters of Norway meeting. It was great to resume after the summer and see people I haven't for quite a while. We learned about the Norse gods.

Well, the camping trip got worse yesterday afternoon. We went back to the fair and K. did have some fun checking out farm implements: 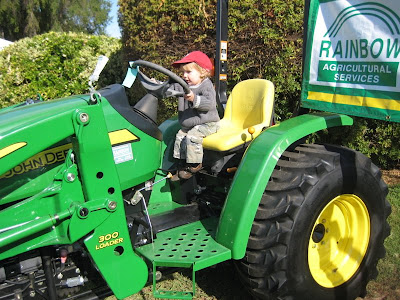 And on carnival rides (The safety belts were rope. Nice). 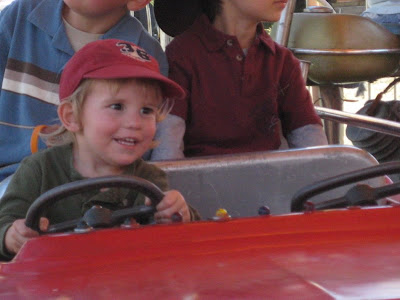 It took a lot of coxing to get his shoes and socks off, but once in the "corn box", he had fun. 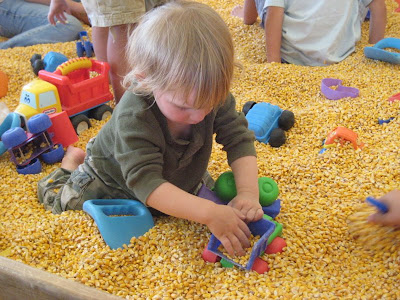 I spent an hour back at the Wool Festival, talked to a couple people and bought a few things, but I didn't really see any demonstrations, and hadn't signed up for classes. It worked out well for my wallet, I guess, but wasn't the fun I had hoped for.

We left and K. turned into a total beast and had the worst meltdown ever when we were having an early dinner at a Mexican restaurant. Fortunately we were outside and by ourselves. He refused to eat and banged his head on the benches and the ground. I wanted to just get food and take it back to the campground but the beast's father insisted we sit at the restaurant, and then when things turned bad he just sat there eating slowly, instead of clearing out. I was so ticked. Beyond belief. You know the days when you just want some time to yourself and sit alone and think or enjoy nature or quiet? Well that was how I felt but I was forced instead to spend my time with these two alien creatures who just love making tons of noise.

We did have an okay evening and campfire, and this morning was okay. K. found a couple little girls to play with. We packed up slowly and cleared out by 10:00.

So the camping trip was pretty bad, but I think the next one will go better now that everyone knows what to expect. And that was the problem, expectations. I knew this trip wouldn't be like those in the past. No leisurely coffee, long hikes, or staying up talking around the fire. But I did hope that getting out of town for a couple days would break up the monotony of constantly monitoring another person. A person who doesn't listen to me half the time, is noisy, and complains a lot. But I ended up working just as hard as I do at home. This weekend was even less relaxing than ones spent at home.

And we did talk about going back to the fair next year. This trip was really just to see how K. would react to camping and to check out the Wool Festival for the future. I will definitely sign up for a class and send the guys off on their own next time. And do a double-check for K.'s sleeping bag which I got specifically for this trip to get him exited about sleeping alone. Three people was a bit tight in our two bags zipped together. Especially when one is fed up with the other two.
Posted by Janice at 8:37 AM