Well, in contrast to last week, no one came to knit night tonight except me, so I sat there alone and listened to other people's conversations. We meet in a dessert cafe and there's wide variety of people in there. Usually there are college study groups. Tonight there was a couple staring into each other's eyes, feet touching under the table. The kissed and got up to leave. The woman stopped and dug in her handbag, I assumed she was checking to be sure she had her birth control. Nope, she pulled out a pack of cigarettes.

A woman was sitting at the table next to me with a laptop. Another woman came in, they greeted each other, and woman #2 sat down, opened her laptop and got on her cell phone. These two sat together, never talking, except to people on their phones for an hour. Woman number #1 was wearing i-pod headphones.

At a far table I heard someone say "Jesus Christ", not in a cussing manner. There were two women talking to what looked like LDS guys on their mission. I hoped their conversation would keep going, I felt very vulnerable sitting there alone and was dreading hearing "could we talk to you about Jesus?". In contrast a group of three people sat down on my other side and proceeded to talk about their experiences with drugs and rock and roll.

I went home a little early and while I was waiting for the streetcar I heard a familiar voice on a cell phone. A woman was complaining about her job but was "glad she had the income so she didn't have to tap into the trust". She sounded familiar because this was not the first time she had been sitting there yammering away on a Tuesday night. The last thing she said was "What are you doing? Am I on speakerphone? Mom, you have to get a headset....You have to get a new phone with Bluetooth and get a headset".

In knitting news, I am making progress on my summer knitting goals. I have finished socks to show, but I just can't get a good picture. I was trying to shoot using a mirror, but had interferences galore, starting with a dirty mirror, ending with a 2-year-old.

It was easier to take this picture of myself as a giraffe at the Zoo. 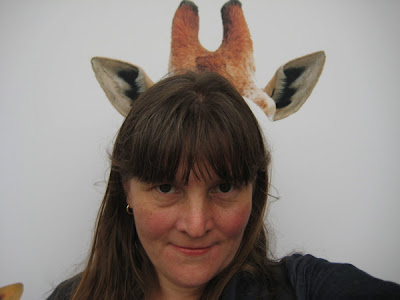 Bet you wanted to yell "Get off the phone!" That's what I think when I see people driving and talking on their phones.