I did the ride, got the t-shirt. 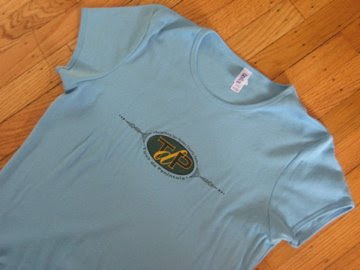 Oh my gosh, it was only a 21 mile ride, but it was an accomplishment after being out of anything other than tootling around town for over three-and-a-half years. There were a couple climbs on the route I was familiar with both of them. I was nervous about the first one because I couldn't remember how steep it is, I remember the end being tough. The other I have done at least 75 times, which is reassuring.

Yesterday afternoon I went for a little spin to loosen up for today and I had a hard time on a couple hills that are normally fairly easy, so I was really nervous last night. I laid out all my gear, checked the bike and tried to get a good night's sleep.

I woke up with sore legs, that never happens, not a good start! But I also woke up with a better attitude. If I had to walk on a hill I would do it. At 5:45 I was in ride day auto-pilot. It all came back to me, including the nervous stomach.

Not much to tell about the ride. It was a beautiful overcast morning, my favorite riding weather. I got there really early, a little too early. I hate the standing around waiting. I was at peace with whatever might happen, and my dorky self in tennis shoes on slightly knobby tires. Then a woman waited next to me with my old bike. A few years newer but same color and model. There aren't a lot of them around exactly like that, people were admiring it. She said it was a little much for the riding she does in triathlons. I wanted to steal it, to be honest.

The ride was nice, lots of flag people, cops and closed off streets in San Mateo. I made the first climb fine, not as bad as I remembered it. A few folks were walking it, or resting half way up. The next part was through Sawyer Camp Trail, which was closed except for the riders. It smelled like manzanita, and was such a treat to ride through virtually alone (the 30 and 60 milers had a different route at that point). We came to the camera and the woman behind me said "Photo op - unzip your shirt". How did she know me?

Then the annoying thing happened. I was about 1/2 a mile from the climb that they neglected to mention, but I knew was there. Feeling good, I hear a voice say "if you raise your seat your legs won't cramp up". I said "thanks". He repeated himself and I shouted "thanks so much!" Yeah, thanks for assuming that because I am large and not on a road bike that I am ignorant. I am well aware how much my leg should extend. Have you ever ridden 480 miles across Alaska and slept in a gravel pit? It is so nice that you are teaching your son about bike riding, but you know what, I don't want your unsolicited advice. I noticed that you took a break and didn't pass me until a mile from the end, were your legs cramped? And nice ancient white helmet from the 80's.

Anyhow, I did the long, steepish climb, then it was all downhill. Got back, and there was an insulting, brutal little uphill to the finish. Did it. Got my t-shirt and left.
Posted by Janice at 2:35 PM