Wow, it's Saturday again. Time just flies by. Here are a few updates.

My Kid and Railroad Geekiness:

The littlest Viking turned three last Saturday. I present my humble attempt at a Thomas the Tank Engine cake. 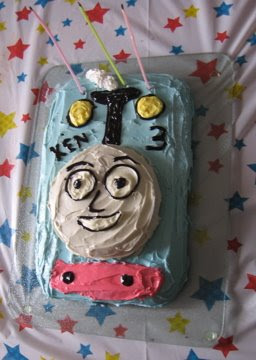 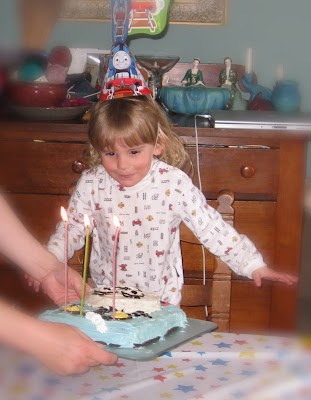 It was a railfan kind of day. First we drove to Martinez, where one can see Amtrak trains and sometimes freight trains. There's also a farmer's market, so we had a picnic. Remember the Martinez beaver controversy? Well, I just read that there are now minks in town as well.

We drove home the long way so the birthday boy could nap, and ended up at Tilden Park. He woke up on the curvy roads, so we decided to stop and take him on the little steam railroad for the first time. What a great surprise that was for him. This photo shows him pretending to take a picture. 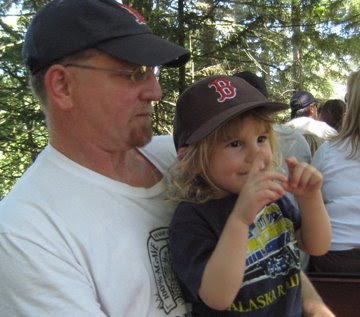 Then we came home for pizza and cake and presents. We now have Percy, Diesel, Bertie, Alfie, and Spencer on our personal Island of Sodor.

Not much to report. I have been working on items for our Christmas in August sale next Sunday. Once that's over, I'm ready to start the leg of my first Garden Gate.

I want to do a proper Tour de Fleece entry, with all the stats. In the meantime here is a pile of everything I spun during the Tour de France: 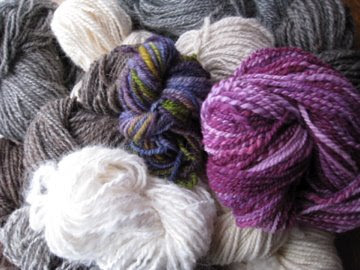 I spun a lot of yarn and learned a couple new things. I also watched a lot of the Tour on t.v.

But the best part was my commitment to riding my bike every race day. Even when we went on vacation I managed to ride the exercise bike at the motel, thanks to the tv in the "fitness room" and my sister babysitting.

I'm feeling stronger after three weeks of riding, it is a little easier taking K. out on the bike. He really enjoys it. I got him little cycling gloves (and new sunglasses for me). He signals when I signal and is in charge of the bell and waving. Last week we took a ride out along the Marina from Fort Mason to Fort Point. He demanded I keep riding and then he fell asleep.

His seat sits on the front of the bike so it has a low back. It was interesting riding with one hand on his chest holding him up. People always smile and wave at us. We are hard to miss. Quite the bike fashion "don't". I believe you should pick one color and stick with it, so I have a pink bike and helmet. But I wear neon a neon green vest or jacket for safety. And I couldn't bring myself to get a pink helmet for my boy. So before you know it, you are a rolling neon rainbow. 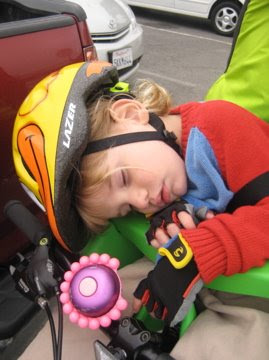 On Sunday, the last day of the Tour, I zoomed down to Safeway because I forgot to get ice cream. I got a few helium balloons, tied them to the bike and rode home. I've never had cars give me so much room before! Not the Champs Elysees, but it felt good to have stuck to riding for three weeks.

I signed up for an organized ride tomorrow that benefits the San Mateo parks. I'm doing the 20 mile route, which is humbling after all the metric centuries I've done in the past. As it is I'll probably get my butt kicked by the few climbs. Oh well, got to start somewhere.
Posted by Janice at 7:41 AM

I need to do a Tour de Fleece post as well. The cake is AWESOME! I bet he was just pleased as punch. My third birthday party is the first birthday I have memories of (smurf cake).

Man, that little 3 year old and his invisible camera is too cute!

Good for you getting back into the biking, and in such a colorful and eye-catching manner. I find that 3 weeks is a turning point for me with exercise and diet, when I really start to notice a positive difference in strength and body shape. Unfortunately it works in the other direction- once I cut down on exercise when school starts and winter approaches, everything goes back to start.