I know some people don't care about their 40th birthday, or birthdays in general. But I love my birthday, in fact the whole month of February has always been my favorite. The pink-ness of Valentines Day, then my birthday, and back when I worked or had a regular job, Presidents Day off. I think we got both Washington and Lincoln's Birthdays off when I was a kid.

I also know most people tend to throw big parties on their 40th. I, however, couldn't think of a theme, and frankly, what I really have been craving is a whole day to myself, and the pleasure of being able to focus on something I enjoy. So way back when registration opened I bought an all-day class at Stitches West to make Sami handgarments. My mother volunteered to stay here all day with the little one, and Mr. TVP scheduled a late start that morning.

This was my first Stitches, and I was going for the class more than the shopping, but I took my birthday money along, and a short list of things I have been looking for. I went to the preview Thursday night to get my badge and the lay of the land. I checked in to say hi to a couple vendors I know. To get ready for an upcoming project, I got the lovely green Blackwater Abbey yarn from Ireland pictured below. I also picked up the Compass Rose Sanquhar Glove pattern from them. It's in the last photo. Look at the beautiful pair Fluffy made. 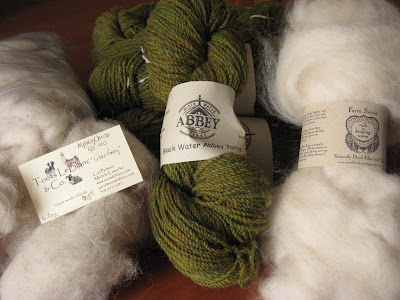 Friday I morning left at about 6:30 to avoid morning traffic. I made a bonehead move and missed one exit, (cut me some slack, coming from 280 you have to get on 85, then 237, neither of which are marked Santa Clara). But I still got there nice and early. The class was challenging and fun. The subject deserves its own post, so that will be tomorrow, or as soon as I can get a good photo of my progress on the project.

At lunch I went over to see my contest socks on the wall. Photos allegedly weren't allowed in the market, but I asked and one of the judges took my picture with the Fana sock. I'm sure the two judges I talked to were famous, but I didn't recognize them. 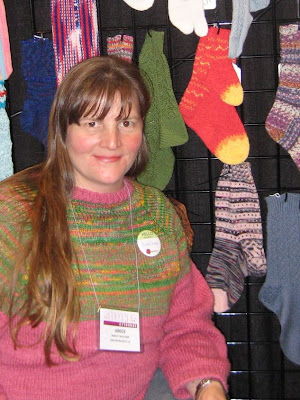 Here's were I will say that I did not win a prize. At first I didn't care, at one point I had actually forgotten about the contest last week, and didn't realize the socks were there until I read the booklet Thursday night. I was kind of bummed thinking about it yesterday when the realization set in, but the winning socks are truly amazing. I think what makes it hard is I spent all the time and money but haven't even worn the socks yet!

The Bohus sock is here on a wall with several of the winners. Go here to see photos that do them justic. The stranded sock top right, made by an amazing Raveler, won third prize. The green one bottom right won Southwest Trading's "Uleash the Creativity" category. I believe the long white sock is the viewer's choice winner. My sock touched a winning sock! 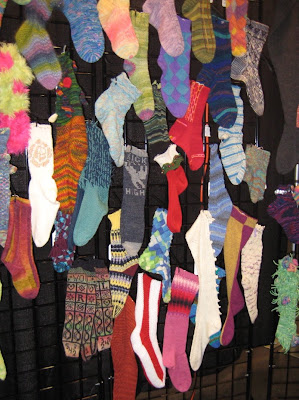 Next I did some shopping. I was thrilled to score some Gotland fiber from A Verb for Keeping Warm to use at my Scandinavian spinning presentation Sunday. It's long and silky. (The fiber that is, hopefully the presentation will be short and concise). Also on my list was Jacob fiber and I found some at Toots LeBlanc's booth. It is actually a 50/50 jacob/alpaca which is good because I want it to be soft, for a project I'm making for the Zoo's shearing day. Those are up there in the photo with the yarn. I also got some Targhee from 'Verb', just because I haven't tried it before. It was too shy to be photographed, I guess.

I picked up a couple patterns at my friend Karen's booth (Royale Hare). I had to show her my sweater, spun from her fiber.

I also got a few back issues of Wild Fibers Magazine and spoke to Linda Cortright. She kicked off knitting the Longest Scarf in the World, which is part of Keep the Fleece. As part of the International Year of Natural Fibers the goal is to raise $250K for Heifer International. Actually the scarf started at Stitches is part of Carolina Homespun's team. 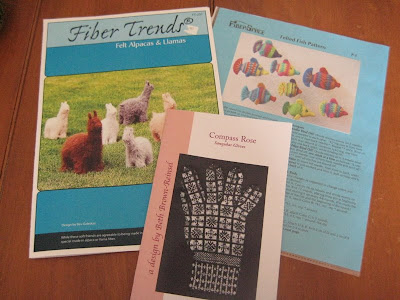 Back for the second half of my class. By the end I was really burned out, and not just due to the 000 needles, so I made one last spin of the market, and headed home before dark.

The word seems to be that there weren't as many vendors, freebies, or deals as in the past. Since this was my first year I didn't know exactly what to expect so I had a blast just being in the fiber zone all day. A perfect way to celebrate entering a new decade.

But my birthday isn't officially over until we drink that bottle of Veuve Cliquot.
Posted by Janice at 12:37 PM

Sounds like a fantastic time. All those socks are amazing!

Thanks so much for mentioning my gloves. If you need any help when you make a pair, don't be afraid to ask.

PS. I got another email for my laptop. It's going to show sandra instead of Fluffy.