Of Rain and Rainbows 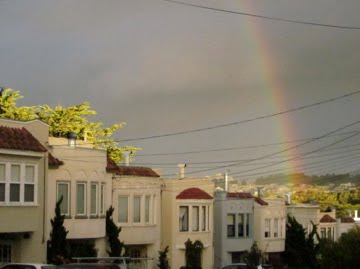 We just got back from a week's vacation. The morning we left it was raining, I went out early and took photos of this rainbow which spanned our neighborhood.

We rented a house in Guerneville and friends and family came from far and wide for Thanksgiving (and wine tasting). I worked on a super secret knitting project, finished it and a scarf. Despite the dire predictions of rain, and my being sick, I rode my bike all but one day.

No photos of the beautiful Armstrong redwoods but here's one of my bike camouflaging itself at the bike shop. This is only half of the pink-ness that is Stumptown Cycles. 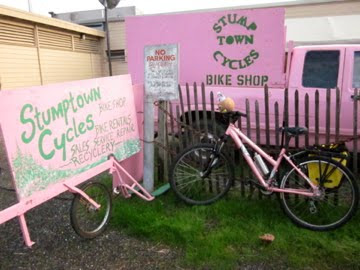 Thanksgiving is not my holiday. Although I love pie, I don't like eating turkey, the glorification of overeating, or football. Not to mention the whole Indian/Pilgrim issue. Despite the day not being significant for me I found myself missing people who are gone. My father, who has been gone since 2001 and those we lost this year, my grandpa, and my aunt Etta.

I never could bring myself to write about her passing in September. She was my clean-living, non-smoking, favorite aunt and she died of lung cancer. 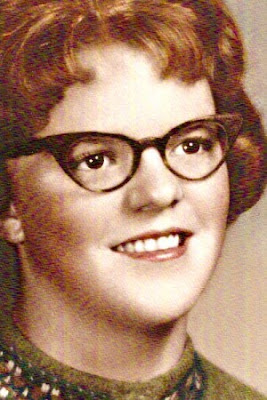 K and I took the train up to Albany where the memorial service was held. It was too soon after grandpa, and too soon to be losing my aunt. The next day we went to the cemetery where my grandma and grandpa are to add the date of his death. I had never been there before. It was raining and I debated bringing K. He had questions like "will we be dead if we go there?" and "will we dig them up?" 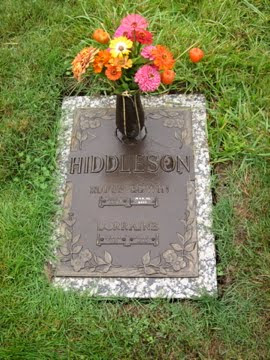 It was low-key and fine. We caught the train the next morning and K cried over leaving his cousins.

Back to Thanksgiving in Guerneville. A lot of the trip involved scenes like this: 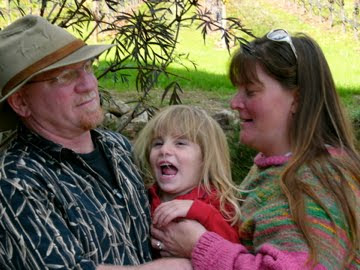 My darling child had been home from school sick the whole previous week. He also woke up between 4:30 and 6:00 every day of vacation. We still love him. 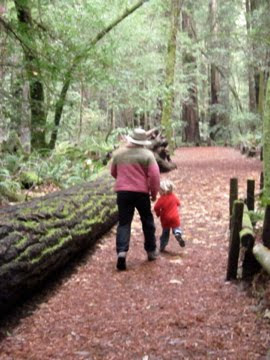 One afternoon I rode out around the bend to see this rainbow over the vineyard. The next day we saw a double rainbow coming back from Sebastapol. 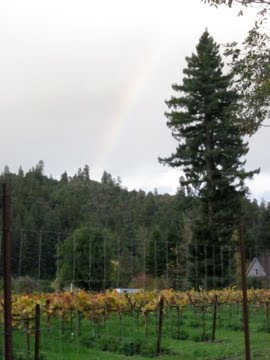 This post is all over the place but I have to mention that during the sick week, when I was wondering how I was going to make it, this fine fellow arrived. 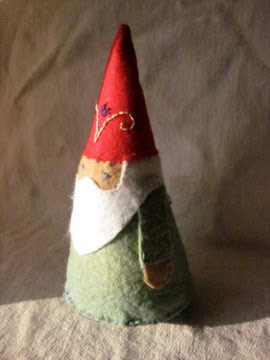 He came bearing gifts of rainbow wool and more. 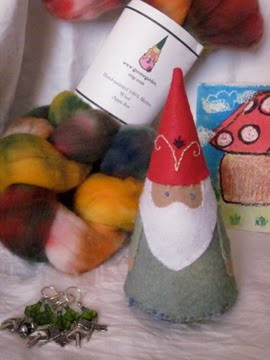 We came back to our apartment to settle back into the routine and culture shock of an old kitchen and small space. I found out that the pastor who confirmed me, Howard Kreiselmeyer, had passed away. He was also too young.

Rain and rainbows, that's how it goes.
Posted by Janice at 1:59 PM