I'm so glad this week is over, it was a long one. I'm still dealing with my grandfather's death, which was compounded by the anniversary of my father's death this week. You never know when a wave of sadness is going to come over you.

Sunday: coffee got knocked over into my laptop. Panic. Left it drying overnight. Well mostly, had to email some files so I could do work on Mr. TVP's ancient imac.

Monday: Kid woke up sick. Scramble to attempt to find replacement for my work day at preschool. Laptop still not quite right, right half of keyboard not working. Use frustrating old i-mac. Have to take sick kid with me to drop off snack at school. Long day with kind of sick kid. I actually was able to get some work done, though. I knew he was sick because he willingly took a nap.

Tuesday: I wake up with kind of sore throat. Kid still has too runny a nose to send him to school, plus he slept in which is sign of illness, he does not like to waste precious time sleeping. Go to Apple store and find repair options. Take time to mull it over and run into friend, who takes our picture. She tells my kid that it was not his fault that he was screwing around and knocked my coffee over. I guess that's better than the reaction of the Apple employee who said "he wasn't drinking it was he?" 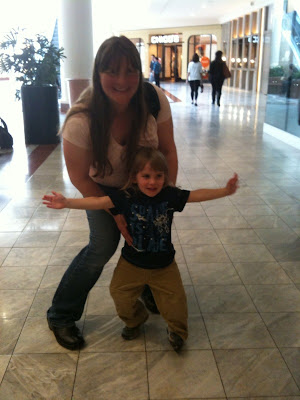 End up replacing keyboard, with caveat that the optical drive will probably go out. Pick it up later on the way to a school meeting.

Wednesday: kid still has really runny nose. Take him bowling for the first time. A lot of fun. Since when did they get these fancy ramps for the kids? They don't have to even push the ball down the alley? He almost got as high a score as I did. I enjoyed playing with my leopard ball and black & white saddle shoes. 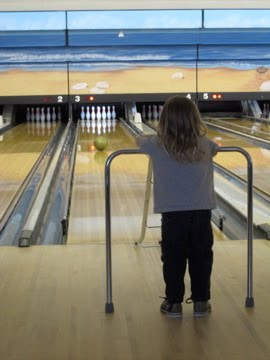 Discover that several keys on my keyboard are not working. Most notably the right-side apple key that I often use for shortcuts. Still haven't had the time to go back to the Apple store as of Saturday. Don't want to drag the poor guy there again. It is crazier there than usual with all the iPad nonsense.

Thursday: Mr. TVP promises to come home really early so I can go bike riding. Did I mention my mother aka my free babysitter is out of town? K. and I go to the "Plant Museum" (Conservatory of Flowers) to see the garden scale trains one last time. Baby doll came along. We even packed him a bottle. Bonus! Thomas was there. 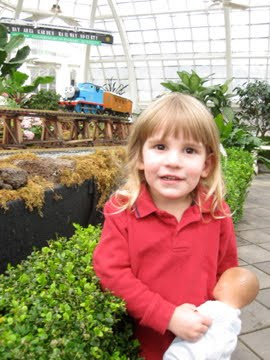 I never got that bike ride. Instead of early, he comes home really late, almost bedtime due to job site issues. I was frazzled to say the least.

Friday: Took K. to Marin to visit with his cousin and my sister at a fancy playground. Good time and it was a beautiful day. Despite that good start I was not thrilled that not only did Mr. TVP and I not get to go out he had a meeting and didn't come home until after 6:00. I also discover by way of getting out of breath coming up from the laundry room that the little bug is moving into my chest. Yippee. 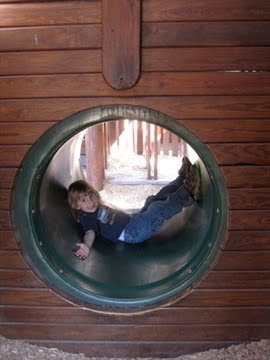 Today I went for a run first thing, and later went on an excursion to take some photos. Got some knitting done on the bus, too. It was nice to be alone.

I'm sure next week will be better. We really did have some fun this week. And I got some good knitting in. But, I am just not cut out for twelve hours with a 3-year-old who doesn't nap. I have no idea how single mothers do it. Really. Especially old single mothers.
Posted by Janice at 7:52 PM

Here's hoping for a less stressful week.
I always wonder how I managed to do what I did when the kids were young. When you're living it, you just do what ya gotta do.