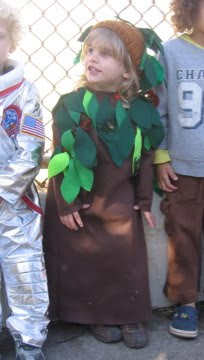 I know most of you have seen in on Ravelry, but here is Kenneth's tree costume.

When we started talking about Halloween he said he wanted to wear a hat. A blue hat with a red B. Hmmmm, you mean the baseball hat he wears everyday? Yes. So I thought this would be a costume-less year. Then we went camping and he hugged a redwood tree. While his hands were full of splinters he decided to be a tree for Halloween. It was really fun, we went shopping for the fabric and accessories together. First it was a "leaf tree", then a "bug tree", then a "bug and apple tree". About a week ago he said from the backseat "Eyes. Eyes for my tree". I asked if he meant the letter or eyeballs. Eyeballs it was. Fortunately he forgot about that, because I ran out of time to craft eyeballs.

We worked on the tree together over the weeks, he did a little cutting. One night he told me he wanted to be a mommy for Halloween. I hoped that would blow over, he's already getting teased for having long hair. I asked if he could be a mommy tree and he said okay. 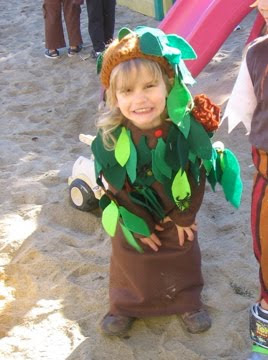 I didn't get the best photos. There's a pipe cleaner nest on his shoulder, and little twigs that stick out here and there. I knit the hat really quickly out of Lopi. Here's some silly video of him walking in the school parade, he's handing me his hawk at the end.

Sooooo cuuuute!!! Now I want to be a tree for Halloween.